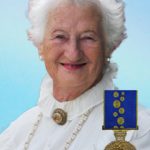 For many years our broad family has looked to our highly regarded and much loved Shirley Davies as the Honorary Leader of our Wilson Family Research Group and indeed the broad clan of family members.

How delighted we were to learn of Shirley’s most deserved honouring in the 2019 Queen’s Birthday Honours Awards list in recognition for her contributions to a range of Community organisations throughout the Mornington Peninsula.

Shirley had earlier received local recognition with the 2014 Westernport/Flinders Community Award, and in 2006 Citizen of the Year, Mornington Peninsula Shire. Many other community activities over her lifetime were presented by the nominating body in support of her OAM Award. We are proud to present these to readers via attachment here – Shirley OAM DETAILS

Shirley being congratulated by the Governor of Victoria, the Honorable Linda Dessau AC, and with members of her family following the ceremony – l to r, son Charles Davies, son Alan Davies, and grandson Zac Davies