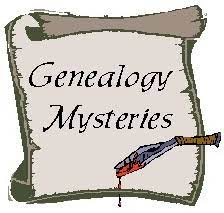 In preparing and publishing our 2020 Family History publication ‘ORIGINS – OUR 250 YEARS STORY’ we identified several  challenging items for ongoing research; matters which had been the subject of extensive research over many years but for which solutions had eluded us.

Stepping back in time 10 and 15 years ago there had been several more matters resting in the unresolved category but which sustained albeit intermittent research effort had finally paid off with full discovery – such as the location of the missing (for some 50 years) Gold Handled Sword of Captain William MacDonald; location of the O’Brien’s Bridge property of widowed Margaret Wilson and her son Frederick Langloh and family.

Then in a kind of reverse sense, the French connection cousins which some older of our family members always suspected we had, ‘discovered us’ when a surprisingly young French family researcher, Romain Quesnel, quite ‘out of the blue’ made contact with us after finding our reference to the Vangraschepe family name on one of the several international genealogy repositories on which we had lodged our Wilson family charts.

Romain was seeking contact with the cousins which he too suspected existed in Australia.

Subsequent exchanges and then visits of the closest extant cousins followed, and the entire story (probably the saddest of all our stories) of the Vangraschepe family relationship and today’s families duly evolved. Jeannie nee Vangraschepe is seen here with spouse Albert whom she met in her home town of Rouen. Albert was a grandson of John Bowman and Agnes Eliza, and on active duty in France as a WWI AIF medic. Their stories may be found on our Family Links and Research pages.

But more than a few nagging riddles remain for future discovery, in Scotland and Australia:-

# the location of the family homes of Bonnie William’s father and mother in Scotland: was the father’s as we have speculated the Wilsonhall property shown on regional maps a little to the north of Monikie village – the indicative circumstantial evidence is the record on the 1789 stone plaque from the Newbigging Church of both William’s father John, and a David Wilson of Wilsonhall. Reverend Chisholm’s ‘The Monikie Story’ refers to David Wilson of Wilsonhall. The 1789 plaque is seen here on the right, and an image of Dunnichen Church & its Churchyard  is on the left with a Bowman headstone centre.

Are these two Wilsons related – brothers, cousins, father/son. And for Margaret Bowman from Dunnichen where she and John Wilson were wed – farming Bowman families have been identified near this village – is Margaret from one of these – some are interred in the Dunnichen churchyard cemetery.

# And Bonnie William’s spouse Margaret nee Williamson – was she an Episcopalian minister’s daughter, from Arbroath, and as further legend suggests, at one time residing with her parents in Kent in England where her father ministered in a Medway parish. Certainly the Williamson name is Scottish and of the same Gunn clan as Wilson. Legend is she was a governess, and we know she was located at Carnoustie at a time when that large-house (Carnoustie House) property was owned by laird George Kinloch (of Kinloch House, Meigle) who we also know was holidaying at Carnoustie with his young children in 1819 immediately prior to being outlawed by the Parliament for his perceived radical political activities, then fleeing to the safety of Paris. Also significant perhaps, the Kinloch family were practising Episcopalians in the midst of a dominant Church of Scotland region. Was Margaret therefore a governess of acceptable religious persuasion to the young Kinloch children whilst their father was an absent political refugee. 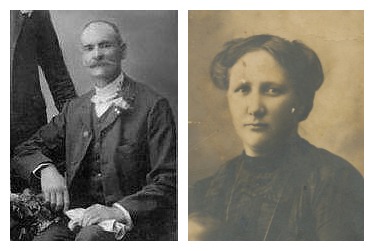 # Closer to home – our research colleague John Wilson has spent countless hours trying to find what happened to the estranged wife of his great-grandfather Edwin Wilson – Annabella Rosa nee Cavell seems to have disappeared right off the map. This female image, half of an old photograph, has a pencilled note on its rear which seems to suggest this is she – is it?. We show it here adjoined (by us) to a known image of Edwin.

# We have searched for the burial place of a son of William Sorell and Eliza Wilson, William Frederick Wilson who died aged 28 months in 1859 when the family was living in the Derrimut locale – intensive searching of BDM records of that era failed to locate him, our speculation being he was interred on the family’s Truganina property, or near the close by one time Rockbank hotel after its relocation beside the Kororoit creek. We are advised that an archaleogical restoration is scheduled for this heritaged edifice during 2022/23 – hopefully it will shed light on little William’s burial. 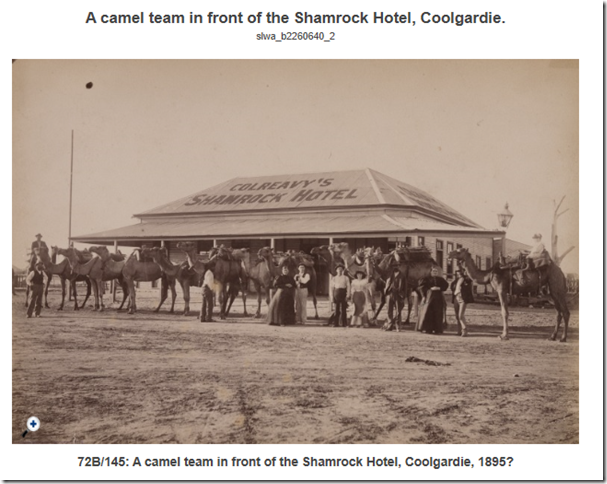 Whilst there was no official cemetery there, it is known there were several interments which took place on its adjoining grounds with some headstones unfortunately covered now with sediment from repeated flooding.

# More mysterious is the disappearance of his near name-sake older brother Frederick William Sorell Wilson who went off to Western Australia in the 1890s presumably chasing the gold rush which emerged there in that decade – the rushes of Kalgoorlie, and Coolgardie. Searches by his family during that decade, again later during the 1930s drew total blanks. Recent enquiry of the Kalgoorlie regional genealogy society  reveals two Frederick Wilsons interred in the Coolgardie area (formerly called Montana).

# The legend of a newspaper advertisement asking for family contact, having been placed in an unnamed Tasmanian publication some time after Bonnie William’s death in 1856. The content of the advertisement is lost but Matriarch Margaret (so the legend goes) directed that no response should be made. If valid, this response by Margaret rather implies there was something of a hidden and sensitive nature she wished to prevent being disclosed to her sons and families. This gels with the legend that William left Scotland under some sort of a cloud with his family – declaring an emotional “I’ve brushed the dust of Dundee from my boots forever”.

It would be interesting indeed to read the message – who sent it and for what purpose?. Events of possible significance in Scotland in the post 1856 period were – the death in August 1856 of William’s son (by Mary Archer) John Wilson (the most likely event ?); and the death in January 1869 of William’s one time servant intimate Mary Archer. Another possibility is the death of his sister Elizabeth which is likely to have occurred sometime from the 1850/60s period.

For these and other unsolved family history questions there is great scope for research and discovery for future family historians – with as yet unexplored resources to be found in local newspapers, church records, et al. 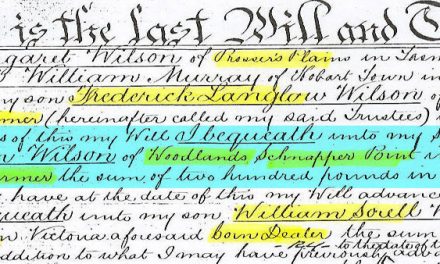 Protected: THE THREE GENERATIONS PROJECT – [A Resources Page for Family Researchers] Under construction