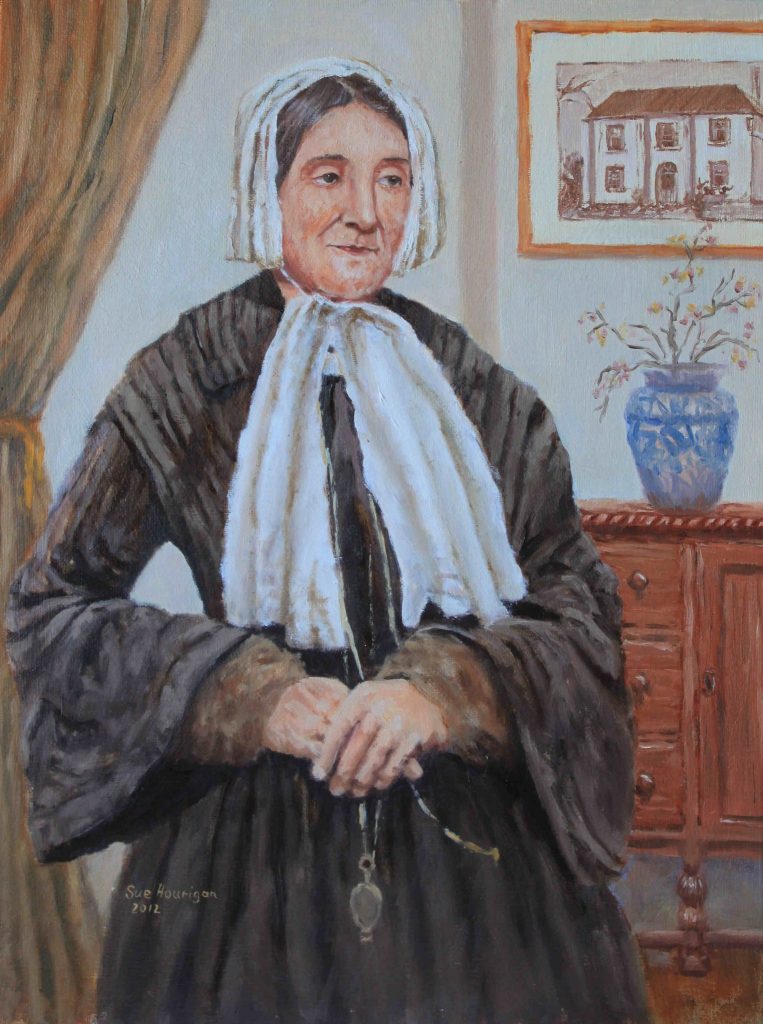 This painting by Sue Hourigan is an adaption based on a 19th century original (seen below) which the Tasmanian family believes was by William. Margaret is aged about 50.

Our knowledge of William Hartley’s bride, Margaret Williamson, is fairly limited. The legend within the ranks of our Tassie cousins is that Margaret may have been a Governess; it goes on that William had a serious falling out with his family because he married below station in marrying a Governess, alternatively that it was because Margaret belonged to a different religious persuasion than William and his family, such as Church of Scotland, whereas William’s family were of the secessionist so called Associate Burgher Free Church Congregation of Newbigging. There existed quite strong religious tensions at that time between the several secessionist movements and the official Church of Scotland (a brief overview may be read here).

The evidence we have indicates Margaret was born in Arbroath in Forfarshire (named Angus today) in 1796, and at the time William was courting her she was living or working at Carnoustie. Carnoustie such as it was then is located within Church and Civil Parishes of Barry – the church edifice for this region then was located at the tiny hamlet of Barry just 2 to 3 km from the Estate. It was at this church, now in ruin, that the banns were read in 1820 for Margaret’s impending marriage, concurrently being read at Monikie Kirk in respect to William.

We know from two small bibles held today by our family in Tasmania that the betrothed couple were together at Carnoustie in 1820 – most likely at the Carnoustie big house. Indeed at that time there was little at the Carnoustie location other than Carnoustie House set on a large farm Estate property, the then Laird of Carnoustie having only recently begun to subdivide the coastal portions of this large property for housing near the coast and around which the Carnoustie village then began to emerge.

Whilst religious tensions may have been a factor, we now know there were additional circumstances which almost certainly added to the tensions within the family in Scotland, and which seem to have eventually led to William leaving Scotland forever immediately after marrying Margaret. These circumstances involve another young woman, Mary Archer, probably not a love triangle situation as it is usually understood, rather a casual affair which took place which in due course saw the emergence of William’s ‘other’ family – see ‘Meet the Archers’ account on the Connections Page.

Is it possible that William’s disconnection with his family was not because he married a governess, but to the contrary because he didn’t marry a governess. This theory potentially places Mary Archer in the governess role. She is described in Monikie Kirk records as a servant in William’s household, and this would perhaps place her at a lower order in the heavily stratified Scottish social culture than would a governess status. On balance a governess role for Mary seems unlikely.

That status would more likely fall to Margaret in an engagement with the Kinloch family located at Carnoustie House. It was one of several large Estates owned by George Kinloch, Esq, whose main seat was at Kinloch House near the village of Meigle. We may speculate as to whether she may have been a governess* or was otherwise employed by members of the Kinloch family at Carnoustie House, but these ideas do seem to converge. Above we see an image of Carnoustie House and beside it an image from one of the New Testament booklets which William presented to Margaret at Carnoustie some 10 weeks prior to their marriage. His written inscription reads, “Margaret Williamson, a token of affection from her intended husband, April 18th, 1820, Carnoustie”.

We note incidentally that William signed his name W H Wilson – confirming that he had been baptised with the middle name Hartley, a fact we had been uncertain about until the Tasmanian families showed our researchers these booklets. If his parents followed Scottish tradition his middle name Hartley would be the maiden name of his maternal grandmother.

Carnoustie House was demolished over 30 years ago, several acres of the Estate now being a public park, with only the remains of the Estate stables on the site.

The image at top of this page is an adaption from a copy of a watercolour painting of Margaret when she was about 50: believed by some of the elders of the Tasmanian arm of our family to have been painted by her husband Bonnie William, who was known to have such talents. The adaption is a painting by prepared for us by artist Sue Hourigan , this work arranged on our behalf by Mike Wilson. An image from the original painting with Margaret aged about 50 is seen in the gallery below, together with a photograph when she was about 70, just a few years before she died.

Margaret about 50 – attributed to William

* Of course the ‘governess’ legend would have had its origins in explanations of why they had emigrated from William and Margaret, and whether Margaret had been engaged as such or not, in the light of our subsequent discovery of the Mary Archer affair, it is plausible to imagine they would quite understandably wish to offer a somewhat ‘sanitised’ explanation, be it of religious or ‘below station’ nature.