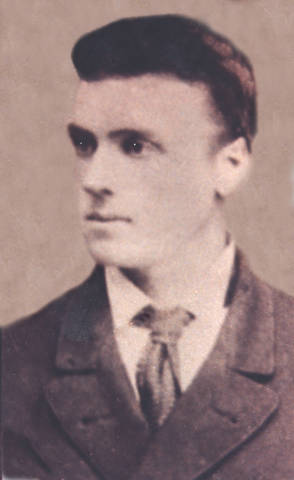 Albert Edward Wilson son of John Bowman Wilson and Agnes Eliza was born in 1861 on the goldfields of Table Hill, Kangaroo (now called Tarilta), near Guildford, south of Castlemaine. He married twice, firstly to Ann Absalom from a Mornington farming family and by whom he produced a family of eight children; then after Ann’s premature death he married Frances Ryan from Sunday Creek/Clonbinane, north of Melbourne, in 1899 at St Kilda. In the image of Albert we see here he presents as a fine looking young fellow.

He had a rather eventful and tragic early life with several very sad events, particularly during the 1890s which saw the loss of two of his sons (more below), his wife Ann in May of 1996, followed in June of that year by the death of his younger brother Charles aged only 29.

Earlier, in his late teens he was a member of the Snapper Point Football Club, and was to accompany the team to travel by a local fishing boat to Mordialloc and to return the same way later in the evening. En route home the trawler encountered a severe squall half way across the Bay and was lost with all hands including the entire football team. The local minister of the Anglican Church lost all three of his sons in this tragedy.

Albert had missed the boat because his boss, a butcher to whom he was indentured as a journeyman refused to allow him to leave until certain butchering jobs had been completed; this discipline saved his life, but imagine the grief he had to endure at the loss of all of his football friends – a truly shattering experience. Albert’s boss was one Stephen Absalom, butcher in Snapper Point (Mornington), who would later become his father in law.

A few years later he was travelling by train near Port Melbourne when the train was involved in a rail crash in which several were badly injured, Albert spending some days in hospital.

Together with his brothers he lived and worked on the family property at his father’s Tuerong Park farm in his youth; later after his father lost the property through insolvency he and his young first family lived in a house with several acres of land on the Bentons Road corner. However it is believed that together with his brothers he still did some work on the Tuerong property to assist his brother Edwin who share-farmed the property with their uncle William Sorell Wilson. There is a report that Albert was quite a champion as a shearer as this story suggests – Albert Wilson – Shearer

The old house on Benton’s Road was there up until 1983 when it was burnt down in an unexplained fire, unfortunately just three months before a trip Laurie Wilson made to the area for the purpose of seeing the house only to be told of the fire by a nearby neighbor. However there was a deep well still on the property there just to the rear of where the house had been, which had been the family’s source of water. The well features in yet another sorry story for Albert and his spouse.

In 1890 two of the family’s little boys were playing out back with an old pram giving one another rides in it. With both of them on board it trundled the slight slope crashing into the low wall of the well and toppled in; both little lads were drowned. They were Frederick Langloh aged 4 and John Harold aged 2; what a heartbreaking tragedy and what strain this must have placed on all the family. But more was to come.

In 1895 Albert and Ann had their final child Alfred Edwin Wilson born in January and dying just ten weeks later in March. Then in 1896 came the death Ann aged just thirty two, and for Albert and his children this must have been the most devasting blow of all. Albert then 35 years old was left with five children aged from under three to twelve years of age.

How did he fare with this challenge; no doubt the oldest child, daughter Georgina Avis, bore a heavy burden in becoming ‘mother’ at her tender twelve years of age. We have no record of their lives through this time – we may be sure that the wives of other of Albert’s brothers as well as his sisters came to their aid also. But even this tragic event was not the end of it.

Albert’s son Charles Edwin Wilson b.1892 at Snapper Point, enlisted in 1916 in the AIF and was posted to England for training in the infantry at a large Army camp at Durrington not far from Stonehenge and Woodhenge. He never even made it to the Front Line in France, dying of pneumonia as a result of repeated drilling in the freezing winter snow and ice, in clothing totally unsuited to the conditions and without even greatcoats to shield them. An example of military stupidity of the highest order. Copies of Charles’ ‘letters home’ correspondence including one just two weeks before his death, in which he talks about the heavy loss of life amongst his Aussie companions for these very reasons. Mike Wilson wrote a moving story (The Rabbit Skins) recalling his childhood memories of hearing from his father about Charlie, and also about the experiences of another of Albert’s son’s, also Albert, survived the War but suffered the effects of gas poisoning for the rest of his life. You may read it here – The Rabbit Skins . An official record story of Charlie is here – Durrington – Charles Alfred Wilson – Australian soldier

One can quite imagine that after such an incredible sequence of personal tragedy, Albert’s mental state may have been somewhat traumatised and whilst there is no hard evidence of this there are some circumstantial anecdotes and family ‘silences’ which can be interpreted to suggest something along these lines.

His second marriage occurred when he was 38 and Frances Ryan was 30. Frances was the daughter of Charles & Anastasia Ryan (nee McCormick) of Clonbinane. They eloped and were married at a Baptist church in St Kilda – Albert from a protestant family, and Frances from a strict Irish catholic family – hence the elopement, as her family would certainly not have approved. The image below is of Frances in her late sixties. In the gallery of related images below a young Frances is seen with her family outside their bark and sapling roofed home at Clonbinane around 1890/5. The old home, relocated a few hundred metres along Ryans Road is still there today, enlarged and known as Mulberry Cottage. 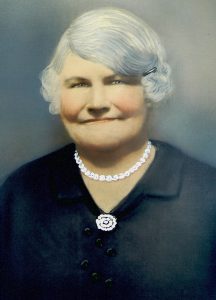 Sometime after marrying Frances, Albert took up residence in Frances’ family domains, in the Sunday Creek and then Broadford locations working as a butcher. Albert’s second marriage children in their later lives seldom spoke of their father other than that he was a butcher and was at one stage working for a butcher at the old Bonnie Doon township which village was long ago submerged under the waters of Eildon Weir after the weir’s level was raised in the 1930s. Sometime prior to 1910 Albert opened a butcher shop in Broadford – it was near the south eastern corner of the main road in Broadford and the road south to Sunday Creek.

‘Tabs’ (Horace) Wilson, Albert and Frances’ youngest son, during his last ten years of life, spoke of his father a number of times, telling his nephews Mike and Laurie Wilson (cousins) more of his father than they had ever heard from their fathers. What Tabs had to say rather suggested that Albert’s personality had as Tabs was growing up become a very difficult one, with frequent anger and aggressiveness towards some or perhaps all of his second family. The image in the gallery below shows Albert near 60 – what might we read in the expression on his face here – a degree of bitterness perhaps. 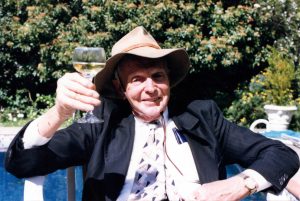 The fact that Tabs only very late in his long life opened up about his father, whilst the other siblings including the fathers of Laurie and Mike virtually never spoke of him at all indicates he was a difficult man and father, and their memories of him were not fond ones. Tabs recounted several events where his father promised a small treat if he performed some task for him, only to reneg on it later and with some vehemence.

Tabs was an incredibly gentle man of subdued personality (a most pleasant gentleman indeed) and one is inclined to believe that he was intimidated perhaps even cowered through all of his young life by his father and that resulted in his quiet and introverted nature. I am further inclined to think that the collective impact of the series of traumatic events over the first 40 years of Albert’s life led to his seemingly depressed and aggressive later life.

Albert according to Tabs had also become something of a drinker and sometimes did not come home for a day or two. Suffering from Consumption he fell dead one day in 1928 almost right outside his Broadford butcher shop. God rest his soul and give him solace from what appears to have been a perhaps understandably stressed life.

In April 2014 grandchildren descendants of  Albert spent a day in Broadford, accompanied by members of the Broadford Historical Society identifying from Society records various locations where Albert and his family had lived. Laurie and Mike Wilson re-enacted a scene from an April 1930s photograph of their fathers with the family dog, Pincher. The precise location on Fitz’s Hill above the cemetery and town was identified and a similar photograph was taken with Mike’s dog filling in for Pincher. An image is included in the gallery below together with one of the group present for the occasion, also in the Gallery. From left to right those present are, Society member, Mike’s sons, Tristan and Adam, Bronwyn, Mike, Maree McQualter nee Wilson, Laurie Wilson, Judy Wilson, and tow other ladies from the Society. 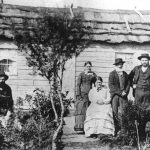 Frances stands next to her mother Anastasia and father Charles 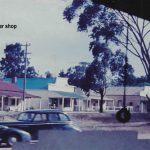 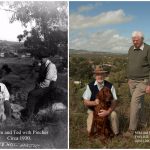 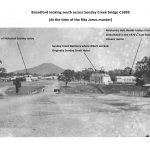 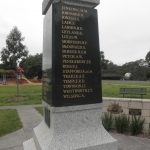 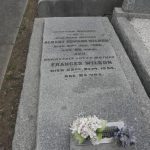 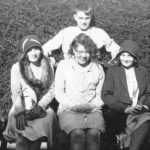 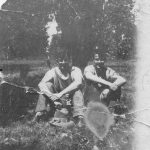 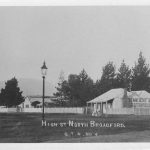 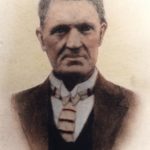 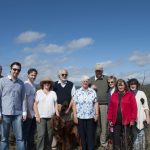