Many people ask about our Wilson origins in the ancient history of Scotland and whether we have a tartan of our own – is there a Wilson Clan per se, and is there a Wilson Heraldic Crest or Shield. In fact, the Wilsons were never a Clan in their own right rather they are a Sept of the ancient Gunn Clan and this Clan has its own ancient tartan which is that on the right above. But there is also, what is believed to be the first tartan (the Ancient Wilson tartan) created about 1780 for the Wilson Sept, shown on the left above, and an ancient Wilson Crest between. We also note that the Williamson name (together with Wilson, common in the Fife and Angus Counties) is also a Sept of the Gunn Clan. Our Bonnie William’s bride was Margaret Williamson. 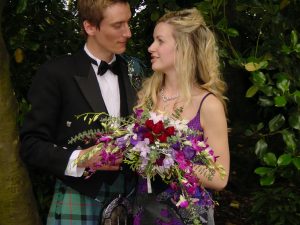 And talking of brides, and bridegrooms and tartans we were greatly honoured when the wedding bells peeled – or was it the Pipes – in the land of our forebears as one of our Wilson clan returned to the auld land to wed a Scottish lassie. G-g-g-g-grandson of Bonnie William and Margaret, Jacob Rosenbrock (via the John Bowman Wilson, Albert Edward Wilson lines) son of Patricia Rosenbrock-Coles, and grandson of our esteemed late cousin Nancy (Williams) Russo and the late Norm. Jacob and Jennifer Wilson wed in Glasgow in 2005.

And to cap it to perfection, no ordinary lassie was the beautiful bride Jennifer (nee Wilson) as she too is a Wilson in her own right – perhaps not one whose family we can link back to Bonnie William and his era, but nonetheless one sharing a common ancient heritage via the Wilson Sept of the Gunn Clan.

Jacob and his brother Luke together with his attendant groomsmen made it a truly grand ceremony in keeping with our ancient heritage by donning formal Gunn kiltage for the occasion  – see the image in the Gallery below of this fine looking set of lads so wonderfully attired for the ceremony. 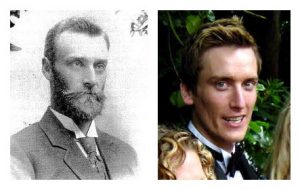 Perhaps the most remarkable thing which we discovered when the images were received was the incredibly close likeness apparent in Jacob and the image we have of Albert Williamson Wilson, grandson of Bonnie William (via his son Frederick Langloh). Family members may recall that the Tasmanian arm of the family have told us of the legendary story passed down in that arm is that Albert bore a very strong likeness to Bonnie William. It does seem as if that gene has been passed down also to Jacob of this generation in the Wilson family. Even the hairstyles are alike. And as well, Jacob is about 190cm tall, exactly the same as legend tells us was Bonnie William (and as confirmed by his wedding shirt held at Narryna Museum in Hobart).

Compliments of Jacob’s mother Patricia, to whom we express our thanks, we are able to display further selected images of this very handsome wedding party – see below. 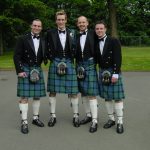 Jacob and Groomsmen in Gunn Attire 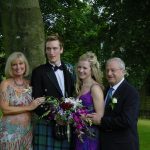 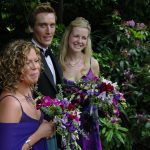