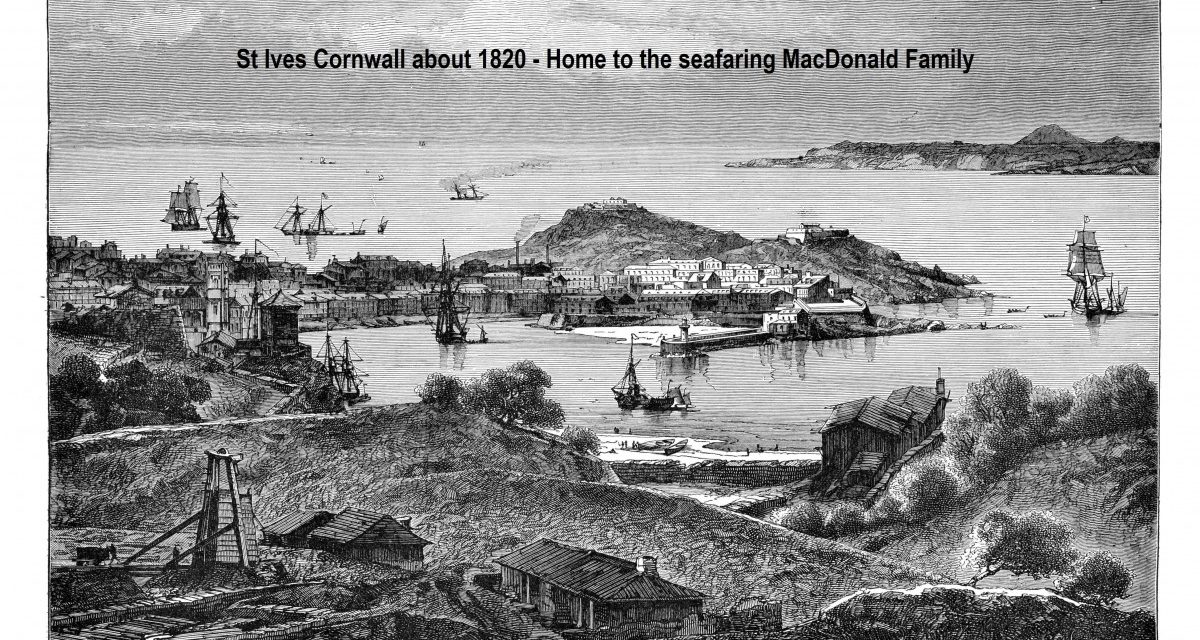 William McDonald, was a seafarer (as was his father) for over 35 years between 1800 and 1840, indeed Captain and/or Master of several vessels operating both in and around European and southern Atlantic waters, and later in Australia sailing between Hobart and Adelaide, Hobart and Two Fold Bay (Eden, NSW) and Sydney.

Ships in which he sailed included the Falmouth Packet, Duke of Marlborough, the Good Intent, and the Britomart in which he first sailed to Australia arriving Hobart on December 31st 1834. Britomart sailed from London in August of that year calling enroute at the Devon port of Tor Bay (Torquay) which she departed September 3rd. She was a former Royal Navy brig/sloop of 242 tons, built at Deptford, Kent in 1808, decomissioned and sold to private interests in 1819, and much later acquired by the MacDonald family, either by his seafaring father or William himself.

We also know William made one voyage back to England departing Hobart in March 1836 with his family on board, returning from that voyage to Hobart in January 1839.

His father and family initially lived in and sailed their ships out of St Ives, Cornwall, but later William McDonald was engaged with a shipping company which operated out of Falmouth. In particular he was Master on board the ‘Duke of Marlborough’, an armed merchant ‘packet’ at a time when Britain was at war with America and France and it is in this connection that William first comes to our attention through his leading part in what was a fascinating maritime event in 1814 when the “Duke’ was involved in a night-time shooting battle with another British ship, HMS Primrose, each discovering the error to their horror at the dawn. 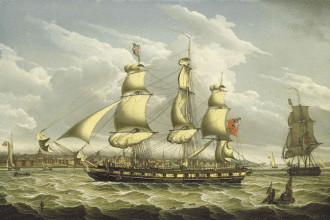 It is clear that William distinguished himself during this ‘incident’ with leadership and bravery, in consequence being presented by passengers of his ship with an inscribed gold-handled sword, and justifying his place in our Honours Roll. Images of the sword and its scabbard are featured on related pages.

Our sword for a long period of time ‘went missing’ from early in the 1950s under strange circumstances – we continued to seek it since that time and were rewarded with its re-discovery in the National Maritime Museum at Falmouth over fifty years later. The saga of search during that time is told in the series of stories about Captain McDonald under this Stories Main Page.

Some 15 years after his 1814 experience we discover more fascinating shipboard adventures occurring in Antwerp, involving perhaps elopement with a much younger woman (Agnes Smith), ship board birth in Antwerp Harbour of a daughter (Agnes Eliza McDonald Smith), ‘Keys to the City’ (of Antwerp) legends, passage to Australia, further merchant seafaring activities around the evolving Australian ports, a voyage to/from England, shipwreck in suspicious circumstances – and finally retirement from the sea to land based life in Hobart.

For a still young Agnes (Smith) following William’s death in 1846, there was to be a second marriage (assuming there was a first marriage) to a man of means, Edwin Donne, who appeared to come from a very well to do family in Castle Cary, Somerset, England.

Ships with which William had known involvement were ‘The Duke of Marlborough’ as mentioned above, the ‘Good Intent’, and the ‘Britomart’ – each with a history and a story. There were others too; indeed after he sold Britomart, he is recorded in official records as having captained several ships in trading voyages around the south coast of Australia to such ports as Launceston, Georgetown, Port Philip, Sydney (Port Jackson) and Eden (Twofold Bay) carrying mixed cargoes and passengers. He appears not to have had ownership of these vessels, rather being engaged to sail them.

Stories of William, and his ‘spouse’ Agnes Smith and ‘daughter’ Agnes Eliza McDonald Smith, are presented in the set of links below together with documents and accounts concerning his seafaring experiences, based on official maritime records in Australia and England. Further accounts of Agnes and Agnes Eliza may be seen in the next listed articles on this Stories mainpage.

The Captain’s Name – MacD or McD: Not infrequently, the spelling of the names of our predecessors in the official records and as passed on in family lore becomes distorted through failure of memory, simple transcription errors, inability to spell, and mishearing leading to phonetic guestimates. Some early immigrants of Gaelic origin changed their names deliberately either officially or unofficially in order to sever the connection to old world prejudice – many Irish in Australia in the 19th century dropped the O’, the Mac or Mc and so on.

Was William’s family name the MacD or the McD version.

In this writer’s opinion the original spelling used by this family back in St Ives Cornwall in the 18th century was the MacD version, but the good Captain for his own reasons changed it to the McD version on arrival in Van Deimens Land in 1833. The basis of this belief is to be found in the following two elements of evidence:-

1) Printouts from the Cornwall Family History Society which in turn have come directly from parish church records there have parents and all siblings, William included, recorded as MacD. Likewise the LDS record (LDS derive its data directly from parish records too) – here it is via copy and paste:-
William Macdonald-England Births and Christenings, 1538-1975
2) the record of Agnes Eliza’s birth as recorded in the Antwerp City Archives for 1831 (she was born on board the Good Intent in Antwerp Harbour) declares William as William MacDonald. It also refers to baby Agnes as Agnes MacDonald. Obviously the authorities there would have recorded what William and Agnes Smith (she is referred to in the document as Agnes Smith, not MacDonald) told them verbally. Perhaps they also had some form of written identification which they showed the Antwerp City authorities.

Based on the above there seems little doubt that William’s original family name was the MacD not McD version. It seems equally clear that he adopted the McD on arrival in VDL.

Then we find down the line descendants using both versions.  Of course both are correct in the sense that originally it was MacD but William himself in all records after he settled in Van Diemens Land was known with the McD version.

For purposes of records on this website, the original MacD is used when referring to pre VDL dates and McD thereafter. However, the names of descendants (defacto descendants really) is recorded with whichever version is recorded in official Australian registries.