Dunnichen, in the old Gaelic ‘Dun Nectan’ meaning ‘Hill Fort’ or ‘Stronghold of Nectan’. Nectan was a Pictish King, whilst Dunnichen became famed in that period of history classed as ‘the dark ages’ as the place of a great battle between Pictish and Angle forces, the local Picts inflicting a massive defeat and slaughter of the Angle force led by Angle King Ecgfrith, in the Battle of Dunnichen in 685. 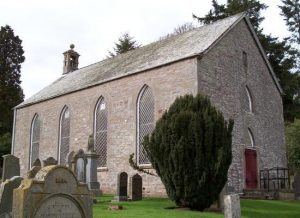 A scenic panorama of the attractive and gently undulating countryside adjoining Dunnichen village is seen in the header above. It was at Dunnichen Church seen here that the Banns were announced in 1820 on the impending marriage of Margaret Bowman of Dunnichen Parish and John Wilson of Monikie Parish – similar Banns were read at Monikie. There are a number of Bowman headstones in the churchyard around the church and several Bowman families are listed in Church and Civil records for the Dunnichen area.

Insufficient research has been conducted up to 2017 for any definitive understanding to emerge of our Margaret Bowman’s family in the area but it is reasonable to assume it will in due course be found to be one of those identified in the official records.