Our cousin Jennie Towan has written a rather moving story of the sad and troubled life of her great-grandmother Jessie Ison nee Wilson who was the fifth child and fourth daughter of William Sorell Wilson and Eliza nee Wilson. The full text of Jennie’s well researched story about Jessie’s trials in married life is attached below. 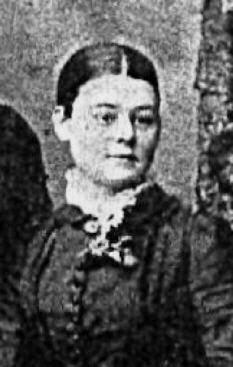 Not only is it Jessie’s story, but it also certainly is the story of the difficulty which women generally in that era had in gaining the protection of society, and of justice. The law was clearly prejudiced against married women particularly – but form your own impression as you read Jessie’s story. A rather poor image of a young Jessie is shown here.

Fortunately for us Jessie took the trouble to record recipes passed down from previous generations of her family, and we are able to pass them on once more. A word of warning though – for those of us fighting to hold our shapes these recipes are ‘dripping’ with some ingredients which just might go against that goal.

Jennie Towan has retrieved a set of the recipes which Jessie used around 1900 era. Jennie can personally vouch for the German pastry (and apple pie) recipe which her mother used as does she – with the dripping (what’s ‘dripping’ I hear the younguns asking) replaced by margarine – Jennie, seen here, says it’s the greatest pastry you’ll ever enjoy. Jessie’s Recipes

And if anyone can find a shank bone for 6d (five cents in today’s language) then let us all in on it! And what happened to the bone when it was dug up again – more soup?

[Editor’s note: I well remember regularly enjoying dripping ‘buttered’ toast during World War 2 when butter and many other food items were severely rationed – yum; it really was the best flavour!]