In the previous page under our Stories heading mention was made in the Agnes Eliza’s Diary poem about the sad loss of a young six year old lass of the family through Diphtheria* – Elma Adeline Wilson. At that time Diphtheria was one of the several main killers of young folks. Elma was the third child of William McDonald Wilson and Emily (Horton) – thus she was a grand-daughter of John W Bowman Wilson and Agnes Eliza McDonald. 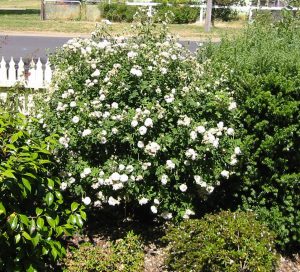 This story is a very short one, as was Elma’s life – she was born October 1884 and she died at 6 years of age in November 1890 during one of the numerous Diphtheria epidemics that so ravished the ranks of young children in that period.

Her parents could not afford a headstone to mark her grave in the Hastings cemetery, but they planted a simple white bush rose there in 1890 – a cutting from this rose was later taken and planted at the premises of the Hastings Historical Society in Hastings. It continues to flourish there today over 125 years after Elma’s passing.

A photograph of the rosebush in the the Society’s cottage garden at Hastings is shown here, and it allows us to remember little Elma.

*[Diphtheria is a toxin secreted by a pathogenic bacterium that causes diphtheria. The toxin gene within diptheria is encoded by a virus called bacteriophage that infects bacteria. Diphtheria toxin was discovered in 1888 by Emile Roux & Alexandre Yersin . Coincidentally in the year of Elma’s death 1890 Emil Adolf von Behring  developed an anti-toxin based on blood: too late for little Elma.